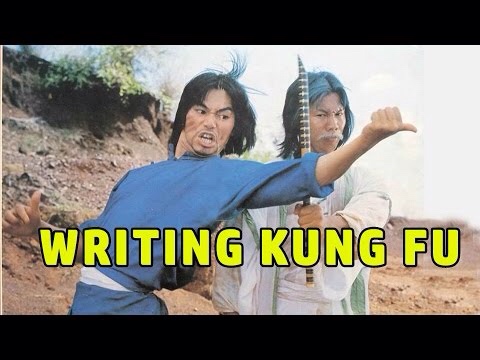 A nation dependent on trade to survive; bandits preying on trade convoys & common folk, alike; fake mustaches that a blind person wouldn’t believe: these are the foundational elements of Writing Kung Fu.

Yes, Writing Kung Fu, you read that correctly. And it’s directed by Bolo Yeung, who needs no introduction.

At the border of the North & South lies a small town called Red Clay Village. It’s a the last place to stop before crossing the border between Northern & Southern China for the regular salt shipments & local security escorts. Yan, a blood thirsty, murder loving martial artist from Vietnam, slaughters a group of escorts. Only two men survive to tell the tale.

Ten years pass, but the massacre is not forgotten.

A teacher in this small town faces hardship, ridicule, & humiliation on a daily basis, causing him to fall into selfdoubt. And this town IS small: the people actually call him “Teacher,” exclusively. The local toughs bully him in the marketplace, where he supplements his income by writing calligraphy for people. He’s called a coward, a dirt poor coward, by a leader of the local martial artists. Once the children at the school discover this, it’s open season on this poor bastard.

You can tell he’s the protagonist because he has the best fake facial hair among the cast: an almost perfectly drawn on fake beard. With only one or two exceptions, it’s solid for the whole film. As a matter of fact, there’s not even a challenger, until Kung fu madman Yan arrives, posing as the advance man for the next salt shipment. He kills, & brutalizes with his unique Flute Kung Fu. Trust me, it’s a sight to behold. But he manages to keep his true identity hidden from the townsfolk & martial artists.

It isn’t all gloom & doom, though. There are some people that recognize the good intentions of the Teacher & attempt to help him. There’s the goofy pair of Martial bums, who are secretly the survivors of Yan’s previous massacre, the young mother of the only good student at Teacher’s school, & the old homeless man who saves Teacher after his near fatal first encounter with Yan & later provides the key to victory.

After a dynamite training montage wherein Teacher combines everything he had learned with his calligraphy, Teacher heads off to confront Yan. All I’ll say about that fight is this: showy Kung Fu gets you killed. Every. Damn. Time.

Writing Kung Fu is an unexpected jem, especially if you’re already a Bolo fan. I’m sure you’ll enjoy it!